Survival Quest Chapter 1- Up a Creek

People climb to where they must. It makes them a success to others or for their own individual goals, just as many pursue Mt. Everest.  A smaller challenge, the Tetons in Wyoming, is a beautiful mountain range rising from soil to the heavens of the defiant rebel Sawtooth wonders.

For men and woman who defy their security, a voice inside tells them no, this is dangerous.  A sudden shift of conviction from adrenalin, uncovers a desire for an extreme adventure that emerges and cannot be denied. 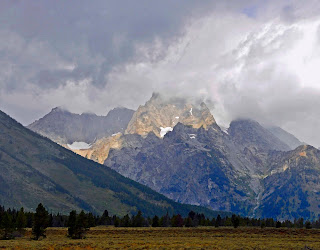 After all, they must.

Young, are the majority, with an occasional revered person who has lived a long life needing one more challenge, the ultimate for them, moves to do or death. With spirt, will and destiny the outcome is determined. These are the brave.

They come from all states, all countries, to challenge the Tetons.

But, some don’t make it. There are climbing fatalities on the Grand Teton Mountains yearly. The park has an elevation of 13,770 to its peaks. In summer of 2014, Mary Bilyeu of Oklahoma ascends the Upper Saddle. She falls.

During another incident, Silas Peterson fell while descending Paintbrush Divide into Paintbrush Canyon. He was using an ice axe but slid down a steep snow-covered slope, could not self-arrest plunging an additional 150 feet on loose rock. Peterson’s hiking partner called 911 and a rescue then ensued.

Both attempts to aid were impeded by severe thunderstorms in the Jackson Hole, Wyoming area. There were huge wind gusts with rain and hail battering their operations, and I am sure, the hiker’s climbs.

The park rangers had issued warnings that the high country and very steep mountain passes were laden with snow and all climbers must consider this and bring proper equipment – ice axes, crampons and warm clothing.

They also caution you to especially be concerned about hypothermia in bad weather conditions. A person with this condition may shake, have slow or slurred speech, stumble, show signs of exhaustion and sleepiness which they should never do and must get out of wet clothes immediately. They should stay high on the ridges (as Larry Difani did in the White Wilderness Expedition chapter of “Survival Quest”). When possible and temperatures warm, they should watch for flash flooding and fallen trees that encumber their trail.

August, 2008, there were three similar accidents in Grand Teton National Park that resulted in death. Why?

George Gardner, 58, had three decades of climbing world-wide experience under his belt and was a climbing guide. In July, 2008, leading a party in the Grand Tetons, he went on his own to do a Free Soloing climb in the afternoon.

Free Soloing is a pure form of climbing, going without a partner and no harness for safety. The climber relies on your physical strength, climbing skills and mental discipline to prevent a lethal fall; there is little room for error. It is a dangerous way to climb. He fell to his death on lower Exum Ridge.

The body was found the next day. There is no way to accurately predict what happened but there was lightning and gale winds of 60 MPH, just 12 MPH lower that hurricane force that must have been a contributing factor.

That year another man tumbled 800 feet when he slipped on snow and was unable to arrest his slide with his ice axe, a second man slipped down a steep slope of rock landing on a ledge above a canyon and a third, from the Panzer’s party, had an accident near Lupine Meadows.

All these disasters seem to involved slippage on snow or wet rock from rain in the mountainous summer with bad weather conditions.

Maybe part of the accidents and death are dictated by how much time you spend in dangerous conditions where your chance of a misfortune increases each trip, or maybe it is karma—it’s just your time.

I’ve loved this area near Jenny Lake, often camping and hiking there through the years, but these mountains must be respected and you need an understanding of its extreme weather patterns.

The weather report was not encouraging to me as I contemplated camping in this area. Intermittent storms threatened the Tetons. After a stint at a local Jackson Hole hostel, I moved north to the lake and set up my tent with the crisp winds of fall. I was excited about pulling my inflatable Advanced Elements kayak from the trunk of my Xterra that had been waiting for one more dip before season’s end.

I notice the grey clouds accumulating so I went quickly to the task at hand—erecting my one woman tent as a breeze pushed frigid artic air in my face, chilling my ungloved hands. Moving to my car I retrieved a Patagonia wool hat and North Star gloves - the best warmth needed in this “pre-fall” weather.

The wind was now playing with my tent—punching its sides to see if I actually had secured it properly and wouldn’t fly to the heavens. My pegs held firm, I had set up a tent in these conditions a few times before.

I retreated inside my enclosure as the wind whipped, with a drink, cold dinner of cheese, salami and crackers—just not what I was expecting for my first camp night. I had planned to prepare steak, bake potato with all the toppings, a fresh veggie, and warm up bakery bread and a desert. That would have to wait for another night.

Keeping my gloves and hat on, I piled 3 more layers of clothing for warmth, climbed in my down sleeping bag rated to 25 degrees, now covered with 2 wool blankets that would surely be necessary as temperatures, much to my surprise for this time of year, were rapidly lowering to a predicted 10 degrees. I survived the night but realized I must get a new bag with a 0 rating next year.

In the morning it was still frigid, so I made a quick decision not to build a fire for breakfast (again another semi-gourmet meal bit the dust).  Instead I lit the small two-inch propane burner I use for kayak camping; it did the trick; I soon had water boiling for coffee—the essential.

Shivering I notice a single guy (I am always interested in a single fellow) in the opposite campground. He saw me at the same time and sauntered over for a chat. The way he moved, he looked like a cowboy, and was.

After small chit-chat, the story emerged.

He and his girlfriend had excitedly met in Jackson Hole after months apart.  She is a doctor from Florida, and he a free spirit from Texas. It was a long term relationship with their meetings several times each year in various locations—of
celebration. This was their new adventure. Well, they had actually met in the Tetons to hike, many times before.

Camping at my favorite place, arriving from Jackson Hole with minimal gear, they secured a site creating a base camp. They packed and soon left for their four day “hike” up the mountain with a tent and light provisions to climb on a sunny crisp Teton day. They were hikers, little worried in the September sun, reassuring each other that possibly they might encounter sprinkles, nothing more, so they did not bring warm clothes.

Neither suspected the dramatic weather change that would ensue.

Mid-day into their climb, clouds accumulated, and the sky turned black and poured its moisture. The couple continued their vacation climb upward, happy to be together as nearly one. But, the rocks on the trail became very slippery. One miss-step ended their couple time together.

She fell just four hours into the climb, on a wet rock, twisting her ankle, was her first thought. No, it was extremely painful, and then she realized, she had broken her leg in multiple locations. She couldn’t stand, let alone walk any distance alone and here they were in the wilderness, no-one else within shouting distance, in a nasty storm without warm clothes or a way to be rescued. After a short time lightning bolts shot up her leg and in her environment. This was serious.

With a medical background, she was prepared, she had a pain killer. Well, at least she could make herself comfortable for a bit. Neither knew how they would proceed. Then, a miracle appeared, two unexpected hikers on the trail few took. They insisted on retracing their steps and helping this woman get to the trail head.

It seems luck prevailed meeting these two men just when this couple desperately needed help and no one was moving on the mountain due to this weather.

Arriving at the base of the mountain, rescuers called 911. She was moved to Jackson Hole for preliminary surgery and stability, and then flown immediately to Florida for extensive leg repair. She was one fortunate woman to have these fellows there to save her. No way could her boyfriend have gotten her down the mountain alone.

Here we were in the campground, she in Florida and her boyfriend sharing their story with a fellow camper.

Looking at statistics of mountain accidents that happen in rugged areas of the western states, they seem to occur in peaks such as Denali, Rainier, Half Dome, in Wyoming and Alaska according to the www.stephabegg.com website. The largest accidents and fatalities were in the 1970s and 1980s, when new terrains were explored.

Maybe our equipment is better today; maybe we are more prepared for mountain challenges. But, this couple made multiple wrong decisions and just had the universe on their side. They were also fortunate to have the pain medicine, but certainly they should have been more aware and prepared for the unpredictable early fall like weather in the western mountains. If they had a cell phone, a call could have been made for help. Luckily, fate intervened.

SallyDeMasi - The World As I See It